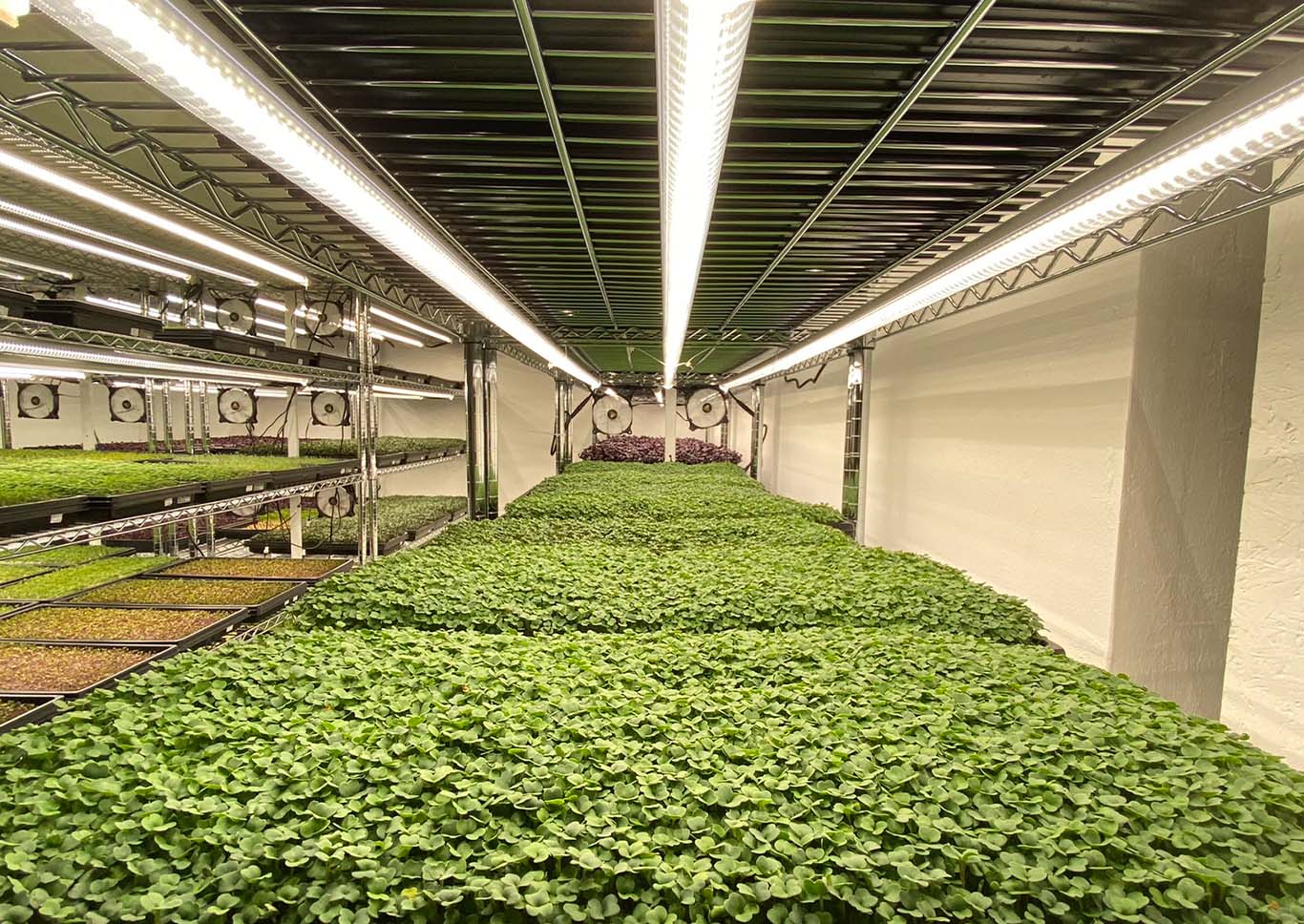 Meet the MingaGreens team! Thomas, Florian and Gernot share a passion for sports and met each other at a local tennis club. When the COVID-19 pandemic kept them from playing tennis, they started putting their heads together to develop ideas for a shared venture.

With different backgrounds in consultancy, physiotherapy, and biotechnology; they aimed to develop their own product that is healthy with an additional focus on sustainability. On their journey, they chose Kroptek LED lights to grow the perfect microgreens.

The concept of aquaponic initially caught their attention and enthusiasm. With limited space and money, they decided to get their first experiences in the food market by growing microgreens instead. The idea of producing hyperlocal food in an urban vertical farm really inspired them.

After a few weeks of testing using the available space and grow tents, the team decided to go for it and MingaGreens was born. Why MingaGreens? In their local dialect, Minga stands for Munich but also stands for working together – a double nod to their origins.

During the pandemic, they became certified to produce organic produces. They then entered the local Munich organic food market, making their products available to both chefs and the broader public. The MingaGreens team is now able to provide Munich and its surrounding areas with fresh healthy microgreens; and they aim to extend their product range with salads, shots, and pestos.

Choosing the right LEDs: an important step for the MingaGreens team

Initially, the team started with cheap LEDs from DIY-stores, which performed well enough on a very small scale to prove the concept. Once they decided to take their project to the next level, they shifted their focus to quality, flavour, shelf life and process optimisation. They noticed that the lights played a major role in achieving their goals and so they dived into the world of professional farming LEDs and discovered a whole range of products and suppliers.

What they were really looking for were research-backed LEDs that have been optimised for microgreens at a reasonable price. As they spent long hours in the grow room, another important criterion was the ability to grow under a full-spectrum white light rather than a spaceship-like purple room!
After researching the market, they chose to work with Kroptek, with the lighting team providing them with the technical support and the horticultural team sharing their expertise.

“With Kroptek LED tubes we found a perfect fit for us that also fitted very well into our racking system. Since then, we have successfully installed 6 racks with Kroptek lights and are super satisfied with the colour intensity, as well as the growth and taste of our produce.” – Gernot Kleinberger, MingaGreens

Next Steps: Get ready to Minga!

Currently, the team is still producing microgreens from their farm in their basement, but they have big ambitions to grow their operation. A new production site, equipped again with Kroptek lights, should be operational in April 2022.

With this new production site, they aim to increase their customer base and launch new projects with their partners; developing new products and extending their portfolio of crops beyond microgreens. One step towards achieving these goals has been recently achieved as MingaGreens joined the Association for Vertical Farming (AVF) – the leading global, non-profit organisation within the indoor/vertical farming industry that is also based in Munich.

Thanks to their new production site MingaGreens will become the leading commercial start-up in the Munich area to grow microgreens vertically as the city seeks to develop into an AgriTech cluster.

Stay tuned to find out how their adventure is going!

Many growers of all levels are choosing Kroptek LED Tube lights for their microgreens projects. Read about some of them here.